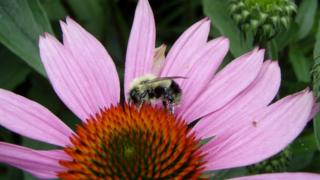 The number of wild bees in the US has fallen in many farming areas.

The first national map of their numbers shows that between 2008 and 2013, the wild bee population went down across almost a quarter of America.

More and more land is now being turned over to growing grains.

US law states that all the gasoline sold, contains at least 10% ethanol - which is mostly made from corn.

In the areas where numbers of bees have fallen the most, there has been a 200% increases in the amount of corn planted.

Wild bees play an important role in pollinating all the food humans and animals eat.

This map shows exactly where wild bees live across the country. 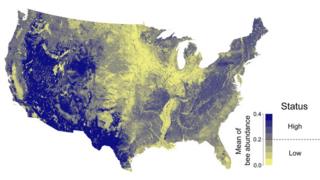 The results show that numbers of wild bees fell by 23% between 2008 and 2013 in key farming regions in California, the Midwest, in Great Plains states and in the Mississippi river valley.

The study also showed that 39% of US crop fields haven't got enough bees to pollinate their crops.

In 2014, President Obama asked for details on the numbers of honey and wild bees across the US.

There are also concerns about the numbers of bees falling across Europe too. 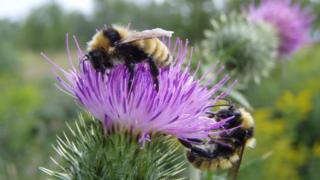 The researchers believe numbers have fallen so much farmers have to buy in honey bees from special companies who travel across America renting out bee colonies to pollinate crops.

But numbers are falling for them too, as many bees have sadly been killed by diseases in recent years.

The American government now wants to protect seven million acres of land where bees can live and continue to pollinate over the next five years.

According to Prof Taylor Ricketts, from the University of Vermont protecting wild bees is not hard to do - but it does mean farmers must set aside habitats for these hard working insects to survive in.

"It's not a big mystery about how to help bees near your farm, they need flowers, they need places to nest and they need to avoid being poisoned by chemicals and we know how to do all those things."

Bees cause a buzz in America