UK astronaut Tim Peake has helped two fellow crew members to carry out a space walk outside the International Space Station (ISS) to carry out repairs.

Astronauts Tim Kopra and Scott Kelly, from the US space agency Nasa, had to fix a broken part.

As they suited up and prepared to go out into space, they got help from Tim Peake and Sergey Volkov.

He is the first UK astronaut to be chosen by the European Space Agency and is spending six months aboard the ISS. 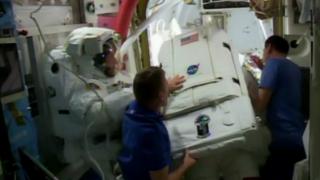 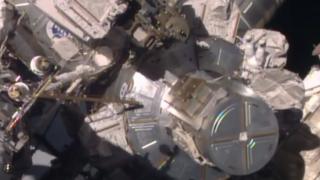 The space walk was the seventh time ISS crew members have ventured outside in 2015.

The astronauts needed to fix a broken part called the "mobile transporter" - a rail car that moves a robotic arm up and down the length of the space station.

It's not clear why it broke.

Space station managers wanted to make sure the part was properly latched down ahead a cargo supply ship arriving at the ISS tomorrow. 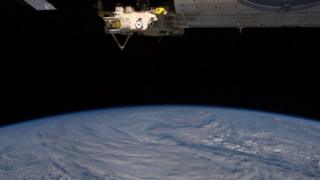 @astro_timpeake
Room with a view: Tim Peake posted this picture to Twitter

Tim Peake's duties included getting the crew inside their space suits and out of the airlock while talking to mission control back on the ground.

The space walk was the third in Mr Kelly's career and the second for Mr Kopra. 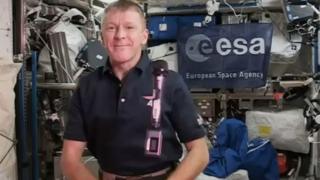 On Friday, during a live link-up from the space platform, he said his first few days in orbit have been 'absolutely spectacular'

He showed off a backwards somersault saying he was surprised how quickly his body had adapted to weightlessness.