Scientists have worked out how an ancient reptile swam in the oceans at the time of the dinosaurs.

Computer simulations suggest the plesiosaur moved through the water like a penguin.

It used its front limbs as paddles and back limbs for steering.

The creature's swimming style has been a mystery since bones of the first known specimen were dug out of a Dorset cliff 200 years ago.

The plesiosaur was discovered by the fossil hunter Mary Anning in 1821.

At the time, even the name dinosaur had not been invented.

A scientific paper outlining Anning's find asked how the marine creature swam, given its unusual pairs of wing-like flippers.

Discussions have gone on for years and now a computer simulation, based on a Jurassic fossil specimen, provides new evidence the creature did swim like a penguin. 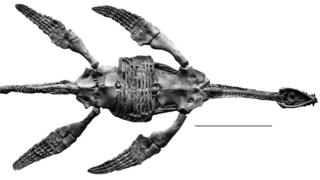 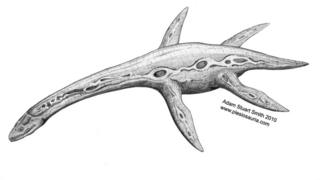 Adam S. Smith plesiosauria.com
How the plesiosaur might have looked

He said some palaeontologists - who study fossils - couldn't agree on whether or not the marine creature used its four limbs in a rowing action like the oars of a boat or in a flight stroke like penguins and turtles, or a combination of the two.

"Our study shows the up-and-down movement is more likely," he said."That's how turtles and penguins swim today. Penguins are literally flying through the water."

The study, is based on a computer simulation of a Jurassic fossil from Germany.

The fossil is unusual, because it's an almost complete skeleton, with all four limbs preserved.

At 3 metres long it's much smaller than many other members of the plesiosaur family.

The plesiosaurs were predators that lived at the time of the dinosaurs.

They are unique in the animal kingdom for having two pairs of large wing-like flippers.

Dr David Martill of the University of Portsmouth said the new work suggested that the forelimbs did all the work.

But he said he wasn't sure if that was the same for the largest plesiosaurs.

"These beasts probably fed by twist feeding like the large crocodiles of today," he said.

"If this were the case, then the hind limbs may have been used to spin the animal on its long axis."