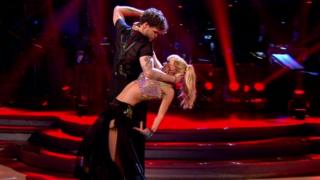 The winning couple performed the paso doble for their final dance

The highest peak from both shows was 11.9 million as Kellie Bright and Kevin Clifton danced.

The results show peak was 11.7 million as Jay McGuiness picked up the glitterball trophy.

But as a share of the total TV audience, Saturday night's first show had an impressive 50.1% while the results show got 48.4%. 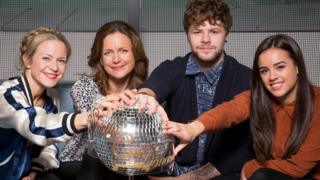 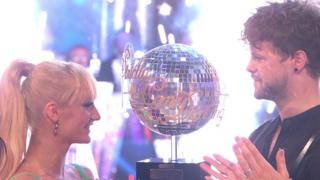 Kellie Bright and Kevin Clifton, and Georgia may Foote and Giovanni Pernice were joint runners up this year.

Asked if he thought he should have won, Jay said: "I think it's down to whoever watches whether they think I deserved to win or not. I think everyone in the final deserved to be there.

"Like anything in life, you can work as hard as you can - but you need an element of luck," he added.

See pictures from behind the scenes at Strictly