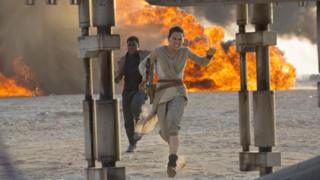 Star Wars: The Force Awakens made £38m on Thursday night.

It beats the previous record held by Harry Potter And The Deathly Hallows: Part 2 in 2011.

Experts say the space story could become the biggest selling movie of all time.

The film also set a new opening day box office record in the UK and Ireland as well. 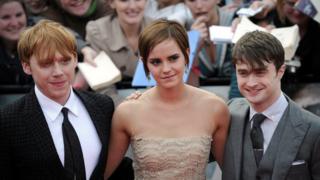 Getty Images/AFP
Emma Watson, Daniel Radcliffe and Rupert Grint at the premiere of "Harry Potter and the Deathly Hallows: Part 2" in London 2011.

Midnight screenings on Thursday made £2.4m in ticket sales.

In the UK, some chains have increased their prices for the film.

For example Odeon, has put up tickets by £2.

Two million tickets were booked in advance for The Force Awakens setting a new record for advanced ticket bookings in the UK and Ireland.

Star Wars: The Force Awakens returns to "a galaxy far, far away" 30 years after the action in the Return of the Jedi from 1983.