Tim Peake's launch - as it happened

Astronaut Tim Peake blasted off into space on Tuesday to become the first British man ever to board the International Space Station (ISS).

He'll now spend six months on board the ISS carrying out science experiments and trying to get young people more excited about space travel.

Here's how the historic day unfolded.

Speaking from the ISS to officials and family members, he said: "It was a beautiful launch. That first sunrise was absolutely spectacular.

"We also got the benefit of a moon rise which was beautiful to see."

And he gave a thumbs up to his wife, Rebecca, who told him: "It was fantastic to watch that launch today.

"There were quite a few parties down on the ground, so your launch was well celebrated by everybody down here.

"Have a great mission. We love you."

Tim Peake, Yuri Malenchenko and Tim Kopra are all safely on board the International Space Station, where they were greeted by the current ISS astronauts.

The European Space Agency (ESA) have confirmed that Tim and the crew have successfully connected to the ISS.

Now there will be two hours of checks and work before the three men can float into the station and meet the rest of the astronauts. 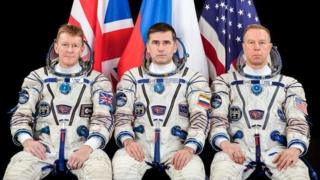 After a few failed attempts to connect automatically Tim and the crew are now controlling the approach to the International Space Station manually. 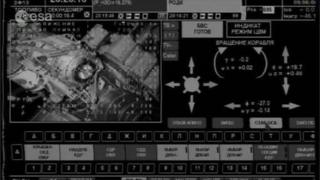 They've had to reverse a bit and are 25 metres from the docking point.

The Soyuz capsule is within sight of the ISS now. This is actually an image of it taken from the space station. 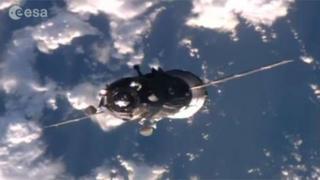 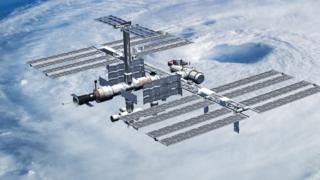 The spacecraft is now in the middle of its approach to the International Space Station. This will take some time as the craft lines up with the station and relies on gravity to pull it in. 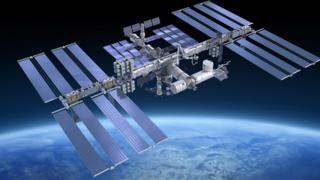 If you're looking to pass the time until Tim arrives at the ISS then why not test your knowledge of all things space with CBBC's International Space Station quiz.

Newsround reporter Naz has been to one of Britain's biggest observatories, Jodrell Bank, to see a group of space fans who watched the launch there.

They've been telling her whether Tim's mission has inspired them.

It doesn't matter how old you get, your parents are always going to be proud of you.

Tim's left his friends and family behind and won't see them for six months now but his mum and dad, Nigel and Angela, were in good spirits after watching the launch.

We've just got this footage through of Tim's two sons, Oliver and Thomas, watching their dad blast off. Watch the clip to see what it meant to them.

Just about three hours until Tim docks at the International Space Station and his thoughts now are no doubt turning to what he'll do when he gets there.

Luckily we caught up with him before he left to ask what he was looking forward to the most. 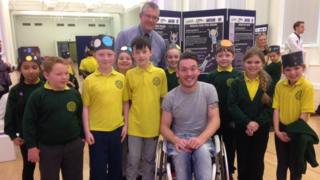 Newsround reporter Martin watched the launch with some of you, at the World Museum in Liverpool.

He said: "This was one of the best days ever! Some kids came in wearing space helmets, which they'd made themselves.

"The museum erupted with cheers during the countdown and everyone knew at that moment, history was being made.

"Afterwards they told me how inspiring it was for them, some now want to become an astronaut just like Tim Peake."

After a busy morning Tim and his crew mates will need a good feed at some point.

Their craft is loaded up with all kinds of special stuff that they can eat in space. Leah got kids at the Science Museum in London to try some of it out.

The spacecraft will now travel to the International Space station where it's expected to dock at 5.24pm.

So, that gives us time to chat. If you're wondering what effect being in orbit could have on Tim's body then check out this graphic. 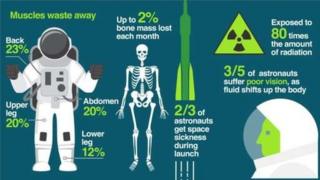 Technology is amazing. Not long after the launch this video was filed back from onboard the Soyuz showing Tim Peake giving everyone back home a big thumbs up.

You weren't the only one to get excited about watching the launch live on TV. 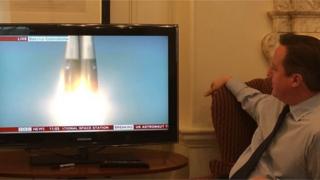 other
The Prime Minister watched the launch live on TV from Downing Street.

Prime Minister David Cameron put this picture on Twitter saying: "It was great to watch Tim Peake blast off on his mission to join the International Space Station."

The Soyuz spacecraft has separated from the rocket that powered it up into orbit and is now flying free. 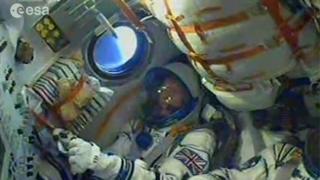 Well who better to ask than one of the world's most famous astronauts. Commander Chris Hadfield was on hand to talk us through the moments just after the launch.

They've got all bases covered when it comes to preparing for the six hour journey to the ISS, including kitting the astronauts out in giant nappies.

Chris Hadfield has been taking Leah through why they are needed, and some of the other cool equipment onboard.

The Soyuz is up, up and away! Cheers around the country as the rocket heads off into orbit. 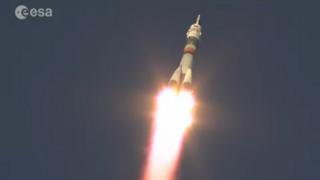 This was the moment it took off PLUS some of the reaction from back here on earth.

Leah's at the Science Museum, in London, where she's been getting kids to taste test some of the food Tim will have to eat during his six months in space. 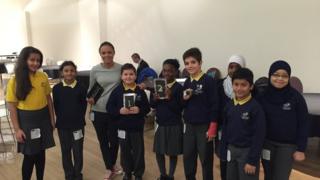 Just minutes away from the launch and Newsround's with kids around the country preparing to take it all in. Ayshah's at Tim Peake's old school in Portsmouth where these kids sent their final good luck messages.

The craft's emergency escape system has been armed and is ready to get Tim and the team out just in case anything goes wrong.

Tim is settled into position on the craft and has already listened to one of the tunes his chose to help him prepare.... it's Lady Gaga if you were wondering.

With the astronauts inside the Soyuz's support structure is lowered to get the rocket ready for launch.

Tim has followed the same traditions as every other person who's taken off from the launch site in Kazakhstan. 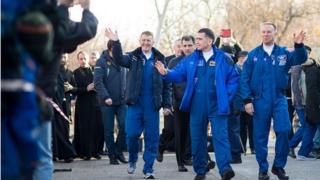 The people in charge make sure everything is done the same way as it was for the first space launch back in 1961, when Russian Yuri Gagarin became the first man in space. 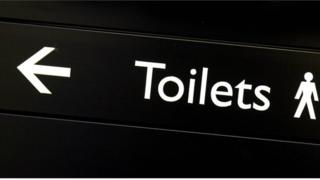 That includes watching the same inspirational video before launch and even stopping at the same place for a pre-launch wee.

Following the tests to see if radio communications between the spacecraft and mission control everyone else has left the launch area, leaving just the astronauts and the rocket.

If you're new to all this and wondering just what Tim's mission is all about then check out our handy guide. 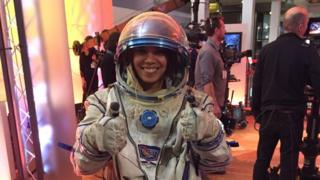 Leah got to try out a real astronaut suit ahead of Stargazing live.

That's right it's Leah! She's presenting a special Stargazing Live, all about the launch this morning.

It's called Blast Off Live and on BBC1 from 10.30am. She sent this picture of her in a real space suit from behind the scenes.

At just after 9.30 Tim and the team will try to make contact with mission control - the group of scientists and other experts who are in charge of the mission back at base. 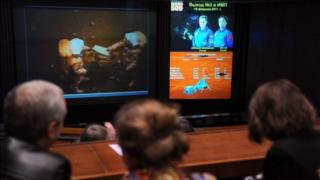 The Soyuz spacecraft that Tim will blast off in travels at five miles a second! That means it could go from London to Edinburgh in less than a minute and a half. 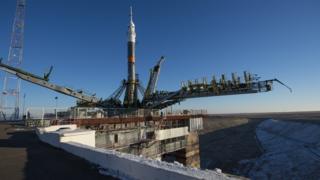 One of the aims of Tim's mission is to inspire more young people interested in space travel and technology.

Ayshah is at Tim Peake's old school this morning speaking to kids about what the launch means to them.

If you're feeling inspired then check out our guide on What it takes to be an astronaut?.

The hatch to the Soyuz spacecraft has now been closed with the astronauts sealed inside. There will now be all sorts of safety checks as Tim and the team look to see that everything is working properly. 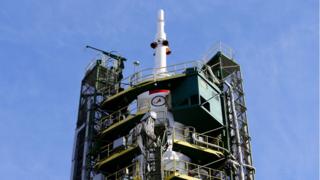 The view from the launch site

The BBC's Sarah Rainsford is as close as it's possible to get to the launch site in Kazakhstan and explained what's going on.

Tim and the other crew members boarded the Soyuz spacecraft that will take them into orbit at 8.33. 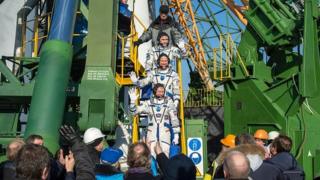 They'll go up on a special lift and then take stairs to the very top of the rocket.

How big a deal is this?

If you're wondering where this mission sits in the long history of space travel then check out Newsround's guide to the space race.

Tim left the hotel earlier this morning saying his final goodbyes and heading off on a bus to the launch site. 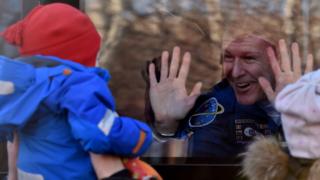 Getty Images
Tim said goodbye to friends and family, including his son, as he left the hotel this morning.

As he left his son asked if he could go with his dad into space. Unfortunately that's not allowed.

He'll be up in space for the next six months and will miss Christmas.

Kids around the UK are getting pretty excited about the launch with all kinds of events and parties planned.

Check out this special countdown, with some cool facts about Tim's mission, that Newsround fans across the country have done for us.

8am - Getting the rocket ready

The Soyuz spacecraft that will blast Tim into space has just finished being filled with enough fuel to get it to the International Space Station. Fuelling started at 6.30am and finished at 8am. 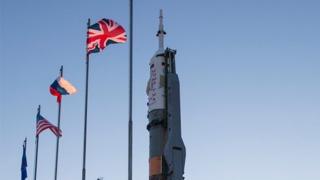 Everything you need to know about the launch

It's fair to say Newsround's pretty excited about the launch. Check out Ricky's bulletin from 7.40am this morning with all kinds of cool facts and pictures about the mission.

At 6.43am this morning Tim, and the other two astronauts travelling with him, put on the special pressure suits they have to wear during the launch. 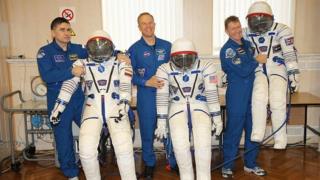 The final go ahead for the launch was given at 5.30am this morning. 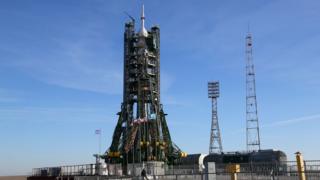 PA
The weather is clear at the launch site in Kazakstan.

There had been worries about whether the weather could delay things but as you can see from this picture from the launch site there is not a cloud in the sky.

Lots of emotions going through Tim's head, no doubt, and lots for him to remember for the launch. But what is he most looking forward to when he eventually reaches the ISS? The man himself has been telling us.

Tim has been training for years to become an astronaut.