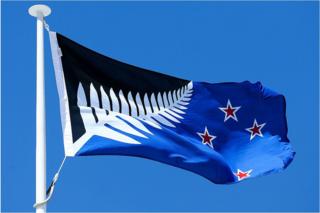 New Zealanders have picked a blue and black design with the silver fern to be a possible new national flag.

The runner-up is a similar-looking red, white and blue design.

The final result will be announced on Tuesday after late and overseas votes are counted.

New Zealanders will now have a second vote, which will be held in March 2016, to decide whether to adopt the new flag, or keep the existing one. 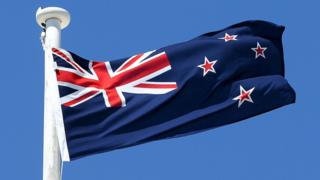 New Zealanders were asked to choose which of five designs they preferred.

About 48% of people allowed to vote took part, which has divided opinion in New Zealand over its cost and timing.

The winner and runner-up flags were both designed by Kyle Lockwood, and feature New Zealand icons the silver fern and the Southern Cross.

The decision to choose a new flag has been backed by New Zealand's Prime Minister John Key, who has said the current one is too similar to Australia's and that it is time to remove the Union Jack, which represents the UK, from the flag.

How are national flags designed?