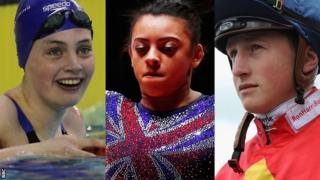 The top three have been chosen by an expert panel from an original list of 10 contenders.

This year's winner will be announced at the Sports Personality show, live on BBC One from Belfast on 20 December.

The BBC Young Sports Personality of the Year is awarded to an outstanding young sportsperson who was aged 17 or under on 1 January 2015.

Gymnast Claudia Fragapane won the award in 2014 after her triumph at last year's Commonwealth Games.

Ellie is the younger sister of Team GB Olympian Becky Downie. Ellie's commitment to her education led her to achieve 5 GCSEs at A-C, while competing internationally winning multiple medals in various competitions.

Alongside sister Becky, Ellie also regularly hosts training sessions at her gymnastics club where children get the chance to train with her.

Five years ago, Tully was sitting on the side of the pool watching her mum, Amanda, swimming for fun. Tully has a condition that causes muscle weakness but that's not stopped her swimming now.

Tully's first appearance on the international stage was in 2013, where she won one gold, three silver medals and three bronze medals in her age group at the 25th German Open Meet in Berlin.

Tom first attended the British Racing School in 2012 for Pony Racing tuition. Tom quickly advanced through the Pony Racing Training and in his final season attended a week-long course for the 10 most promising pony racing jockeys in the UK.

Richard Hannon Junior, a previous champion trainer of racehorses and Tom's boss, has said: "There's no doubt Tom has the ability to go all the way. He rides very well and is a pleasant lad who works hard and deserves all the success he has had these past 12 months."