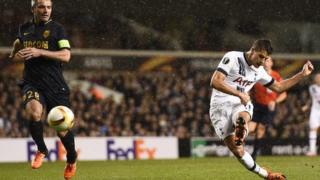 Erik Lamela scored a first-half hat-trick to make sure Tottenham topped Europa League Group J in style with a 4-1 victory over Monaco.

The Argentine player expertly placed all three of his goals beyond visiting keeper Danijel Subasic, who had a night to forget.

But Tom Carroll's close-range finish rounded off another brilliant display by Mauricio Pochettino's side.

Getty Images
Erik Lamela's hat-trick was the first of his senior career
What next?

By finishing top of their group, Tottenham avoid having to play the best teams which will drop down from the Champions League in the next round.

Fenerbahce 1-1 Celtic: Celtic ended their Europa League campaign without a victory but at least managed to grab a draw. They finish bottom of their group with 3 points and exit the competition.

FC Sion 0-0 Liverpool: Liverpool finished top of their Europa League group by drawing with FC Sion in a boring game in Switzerland.