Strictly Come Dancing: Best dances of the series so far 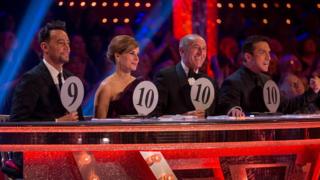 It's the semi-final of Strictly Come Dancing this weekend and things are hotting up on the dance floor.

Jay, Georgia, Anita, Katie and Kellie will be feeling the pressure as they have to dance to two different routines each on Saturday.

Here at Newsround, we have been taking a look back at some of the remaining five contestants best dances from this series.

Jay absolutely smashed the leader board in week three of the competition.

He and his partner Aliona danced a Pulp Fiction-themed jive during movie week, earning them the first 10 of the competition and scoring a whopping 37 out of 40 points.

Judge Bruno said it was the best routine he had ever seen on the show!

Georgia ended up in the bottom two last week after dancing to a Beauty and the Beast-themed dance for musicals week.

But it was her Ghostbusters-themed tango from week six that saw her rise to the top of the leader boards for the first time in the series.

She scored 35 out of 40 points and Judge Len Goodman nicknamed her the "Queen of Halloween".

Anita and Gleb wowed the judges in week nine, with one of Strictly's most notoriously difficult dances, the Paso Doble.

The duo notched up an impressive 37 points with judge Darcey Bussell awarding them full marks, saying they blew her away.

Katie and her dance partner Anton whipped the judges into a frenzy with their American Smooth routine in week nine.

They earned an impressive 35 points, and judge Bruno even said they "looked like a dream".

Kellie and Kevin impressed the judges in week nine with their office-themed quickstep routine, pushing them to the top of the leader board.

They smashed the scores and received 37 points and even pleased perfectionist judge Craig, who said he "loved it".

Strictly Come Dancing: Who's paired with who?

Kids give us their Strictly Come Dancing predictions