The wild pig who thinks he's a cow 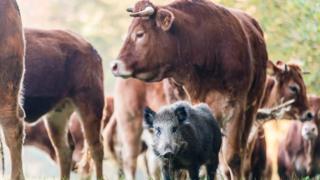 AP
Banana found other pigs 'boar-ing' so he went to live with the cows instead.

He usually lives with other pigs in forests in Germany but for the last two months, he's been adopted by a herd of eight cows. 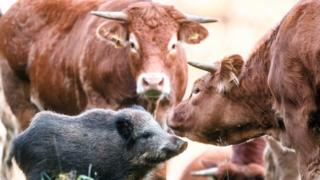 AP
Banana's settled in quickly with his new family.

Dick Reese, the farmer who owns the cows, says that Banana has become a bit of a local celebrity.

He's not worried about local hunters trying to catch him, because he says that Banana has a "special status" in the local area.

Amy the piglet is top in dog agility classes

Meet the duck who thinks a man is its mum