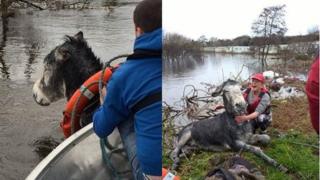 AHAR
Mike had a big smile on his face after rescuers towed him to safety.

A donkey can't stop smiling after he was dramatically rescued from flood waters in Ireland.

The Animal Heaven Animal Rescue charity received a call from Mike the donkey's worried owner after he escaped into a flooded field.

The charity immediately put out an appeal on social media, asking if anyone had a boat to help rescue the donkey.

Someone came forward, and they took the boat out to Mike in the flooded field.

Rescuers workers had to carefully put a life buoy over the donkey's neck, and then tow him to land.

Once he was out of the water, vets checked him over and he ate a big bowl of vegetables.

Storm Desmond: How it affected you

Storm Desmond brings flooding and disruption to parts of UK