Bournemouth beat Chelsea 1-0 to get a famous win 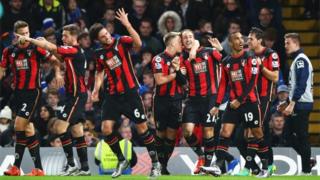 They are the first newly promoted side to beat Chelsea at home since April 2001.

Bournemouth have never played in the Premier League before, and their manager, Eddie Howe, described the 1-0 victory as "the biggest result in the club's history."

It was Bournemouth's first win since since beating Sunderland in mid-September, and moves the south coast club one point clear of the relegation places.

"It was really emotional in the dressing room afterwards. I'm so proud of them. The club has never been in the Premier League so winning at the champions is a huge result for the club. Hopefully it will be talked about for a long time to come but we don't want this to be a one-off game."

Eddie Howe: Bournemouth boss is LMA manager of the year