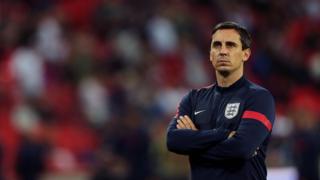 Gary Neville has been named as the new manager of Spanish club Valencia.

He'll take charge of the La Liga side for the rest of the season.

The announcement has come as a bit of a surprise but Neville's former manager Sir Alex Ferguson believes he has what it takes.

"His leadership skills are strong, he's honest and he's hard working. He is the type of character who is not afraid of making big decisions, which is a vital skill when leading.

It's the former Manchester United defender's first job as a manager although he has been part of the coaching team for England.

Gary's brother Phil is already a coach at the club having worked with the last manager Nuno.

His first match in charge will be Champions League clash with French side Lyon on Wednesday December 9.