Liverpool through to league cup semi-finals 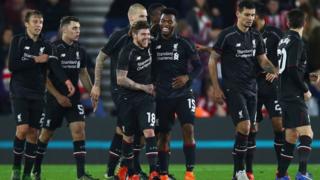 Liverpool are through to the semi-final of the Capital One Cup after beating Southampton 6-1.

Southampton had scored the fastest League Cup goal this season when they went one up after 39 seconds thanks to Sadio Mane.

But striker Daniel Sturridge hit back for the reds with two goals in four minutes.

Liverpool will now face Stoke in the semi-finals and Everton play Manchester City in the other semi.