Great Britain have won the Davis Cup for the first time since 1936 after Andy Murray beat Belgium's David Goffin to get the decisive point in Ghent.

Britain have now won the Davis Cup, the tennis version of the World Cup, 10 times in total.

Murray can also add the team title to his other major wins at Wimbledon, the US Open and the Olympic Games. 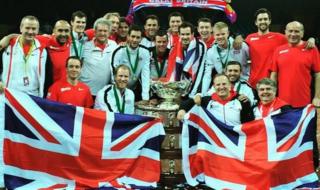 Andy Cryer
Jamie Murray posted the above picture on Instagram with the message "Davis Cup Winners 2015!!!"

What is Davis Cup tennis?