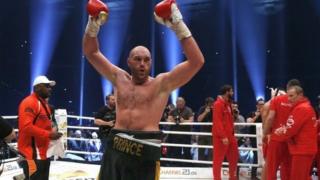 Britain's Tyson Fury pulled off one of the great boxing upsets as he beat Wladimir Klitschko to become heavyweight champion of the world.

Fury was awarded the win by three judges who were scoring the match after both men completed all 12 rounds.

The British fighter has now won all 25 of his matches.

Ukrainian Klitschko, whose nine-year reign as champion was brought to an end, says he wants a rematch with Tyson Fury next year. 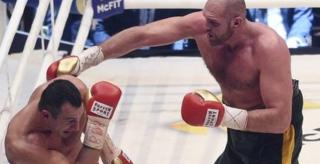 "You're a great champion Wlad, thanks very much for having me," said Fury, moments after his win was announced in Dusseldorf, Germany.

To the delight of British fans in the 50,000-capacity Esprit Arena, he started to sing Aerosmith's hit I Don't Want To Miss A Thing, dedicating it to his wife and his fans in Ireland, the UK, the United States and Germany.

Amir Khan explains how he trains during Ramadan