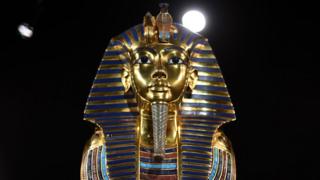 AFP
Tutankhamun may have been Nefertiti's son

A mystery, which has puzzled archaeologists for years, is closer to being solved.

Egyptian officials say they are now "90% sure" there is a hidden chamber in King Tutankhamun's tomb.

Dr Reeves believes Tutankhamun's remains may have been placed into what was originally Nefertiti's tomb.

The Egyptian Antiquities Ministry said it had carried out scans of the 3,300-year-old tomb near the Valley of the Kings in Luxor.

"Clearly it does look from the radar evidence as if the tomb continues, as I have predicted," Mr Reeves said at a press conference on Saturday.

The scans will now be sent to Japan for further analysis. 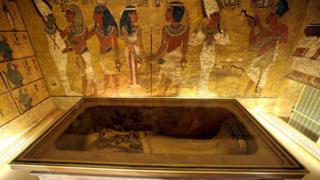 Tutankhamun's tomb was the most complete ever discovered in Egypt. Close to 2,000 objects were found inside.

But its layout has been a puzzle for some time with many archaeologists wondering why it was smaller than those of other kings' tombs.

Dr Reeves believes there are clues in the design of the tomb that show it was designed to store the remains of a queen, not a king.

We won't know for sure, unless Egyptian authorities choose to break through to mystery doorway and have a look.

King Tutankhamun's beard glued back on after damage