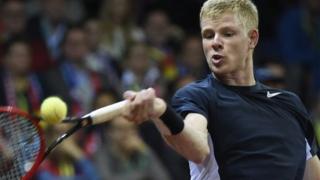 Britain fell behind in the Davis Cup final as Belgium's David Goffin came from behind to beat Kyle Edmund.

Britain are trying to win the Davis Cup title for the first time since 1936.

The two international teams will face each other in five matches over three days.

The first side to win three matches will take home the Davis Cup trophy.

The Newsround guide to the Davis Cup