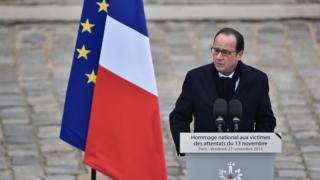 Getty Images
President Francois Hollande paid tribute to "130 smiles and faces" of the victims of the attacks in Paris.

France has held a national memorial service for the people who died in the Paris attacks on 13 November.

Friday's service in central Paris, the capital city of France, brought together 1,000 people.

They included French President Francois Hollande, as well as people affected by the events.

One hundred and thirty people were killed and more than 350 people were injured in the attacks - the worst in recent French history.

A minute's silence was held and the names of all the victims read out.

Find out more about What's happening in Paris by clicking here. and if anything in the news upsets you you can find help and advice here. Advice if you're upset by the news

Paris attacks: Mother and daughter talk about what happened

Paris attacks: 'We are supporting each other'

People in Paris are trying to return to normal life