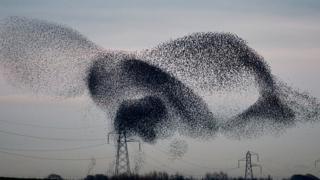 Scientists are hoping to learn lots more about how starlings fly in formation with a little bit of help from the public.

It's called a murmuration and it's when starlings fly in big groups. It almost looks like they're dancing together in the sky.

You're most likely to see it between October and March.

Scientists want people to record where and when they see the birds performing a murmuration.

Results from last year showed that there sometimes more than a million birds in a flock and they can fly together for more than an hour.

Why do starling 'murmurations' happen?

New life for chained up lion at reserve in Amazon rainforest