One Direction named Artist of the Year at American Music Awards

One Direction picked up the top award at the American Music Awards winning the Artist of the Year award for the second year in a row.

They also won best group even though they're due to take a break next year.

Liam Payne added: "We can't believe we get to win awards like this." 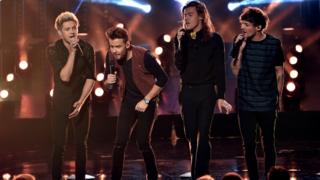 The boys thanked their families and their fans for all of their support over the past five years.

Taylor Swift was the biggest winner of the night winning three awards including, Song of the Year, for Blank Space.