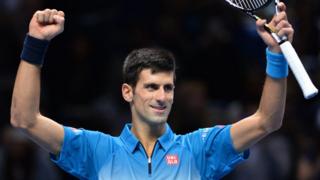 He's become the first player ever to win this final tournament of the season four times in a row.

He described his performances, "as close to perfection as it can get".

"It's been a great year with many highlights. If I can, I would pick obviously Grand Slam wins, especially the Wimbledon and US Open. I think this tournament, as well," he said.

The result also means that Andy Murray ends the season as world number two ahead of Roger Federer.