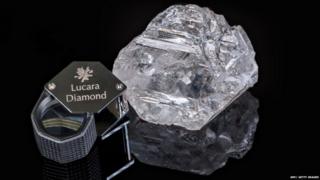 The second largest diamond in the world has been found in Botswana, in Africa.

The 1,111-carat stone, which is around the same size as a tennis ball, was found at the Karowe mine.

It's thought to be the world's second biggest diamond ever and the biggest find in more than 100 years.

It's not yet known how much it's worth but it's likely to be very expensive.

The biggest diamond ever found is the 3,106-carat Cullinan diamond.

It was found in South Africa in 1905 and cut into nine separate stones, many of which are in the British Crown Jewels.

Huge diamond has been sold in Switzerland