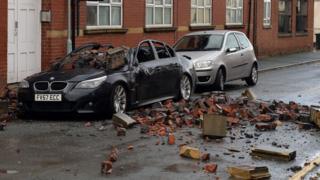 AFP/Getty
This car in Manchester was damaged when the strong winds knocked off part of a building. No-one was injured, and the people living there were safely evacuated.

Thousands of homes in the UK have no power after damage caused by storm Barney.

Engineers have been working through the night to help try to bring power back to homes in Wales, the Midlands, and in southern and eastern parts of England.

Storm Barney blasted the UK with winds of up to 85mph in some places. 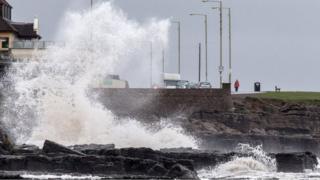 As well as damaging houses, the storm has caused lots of problems for rail services.

Network Rail said that items such as trees, a garden shed, a gazebo and a trampoline had all blown onto some rail lines. 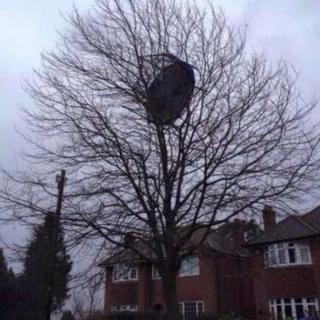 Twitter/@andyru68
A trampoline was blown high into a tree in Basildon, Essex

The Environment Agency also has 10 flood warnings in place - meaning "flooding is expected and immediate action is required".

Storm Barney has now moved on, but weather forecasters said that it was caused by lots of low pressure systems moving in from the Atlantic.

They also said there will be a change in the weather at the end of the week, with colder air moving in from the north.