Ireland through to Euro 2016 after play-off win 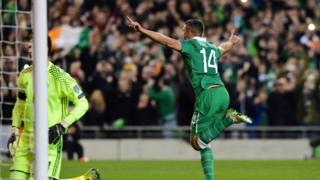 The Republic of Ireland will be taking part in Euro 2016 after beating Bosnia-Herzegovina in the play-offs.

They join England, Northern Ireland and Wales who had already qualified.

Stoke striker Jon Walters scored twice to beat Bosnia-Herzegovina 2-0 on the night. It meant the Irish won 3-1 over two matches.

Manager Martin O'Neill said, "I'm thrilled, thrilled for myself naturally, rather selfishly if that's the case.

"But I'm thrilled for the players because they have put heart and soul into the games."

The robot footballers hoping for a cup win