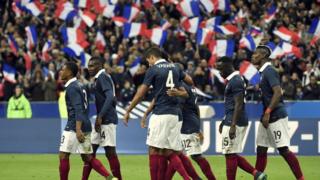 The international match between England and France will still be played on Tuesday night, despite the attacks that took place in Paris.

England manager Roy Hodgson said, "The match will be a serious occasion but one that shows that the football world is united against these atrocities."

"I am sure the England team and our fans will play their part and show solidarity with our French friends on Tuesday evening and provide support for both teams during this difficult time."

Football Association chairman Greg Dyke added: "Our thoughts and sincere condolences are with the city of Paris after these terrible atrocities. On behalf of the FA, I want to express our sorrow and send our deepest sympathies to the family and friends of those who have lost their lives.

"After consulting this morning with the French Football Federation and the British Government, we have decided together that the match between our two countries at Wembley Stadium on Tuesday should go ahead."

Paris: Support from around the world