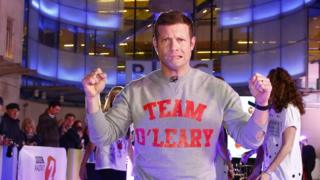 Dermot's no stranger to charity - he completed a 24 hour dance marathon for Comic Relief earlier this year.

Dermot O'Leery will now present Children in Need on Friday night, after Sir Terry Wogan was forced to pull out because of health reasons.

It's the first time Sir Terry's not presented the show since it started in 1980.

Dermot said: "It's a huge honour to be asked to step into Sir Terry's shoes tonight; he is one of my broadcasting heroes."

The show will also be presented by Tess Daly, Rochelle Humes, Nick Grimshaw and Fearne Cotton.

One Direction write kids' book for Children in Need 2015