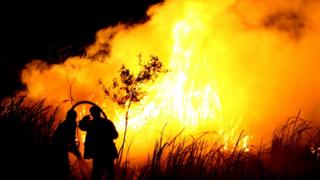 AFP
Forest fires have been burning in Indonesia for several months, causing devastation for the people and animals living nearby

They've been burning for several months and the smoke has spread to nearby countries like Malaysia. 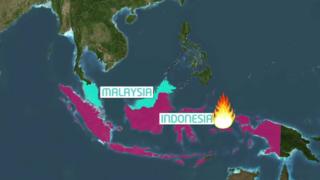 It's a problem that affects Indonesia every year, but scientists say this year could be the worst since 1997. 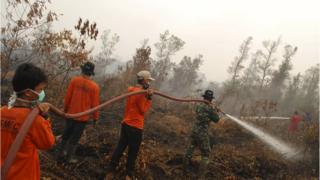 Big companies, as well as farmers with small areas of land, are thought to have started many of the fires.

They do it to quickly clear the land to make way for palm oil, pulp and paper plantations.

But high temperatures have made the situation worse.

The heat has made the land very dry making it easier for the fires to spread quickly over huge areas. 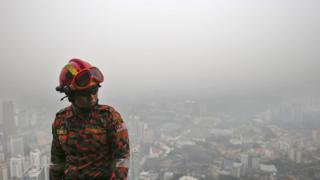 EPA
A thick smog from the fires has formed over many countries in Southeast Asia, including over Malaysia's capital Kuala Lumpur

The fires have created a smoky haze, which have spread to nearby countries including Thailand and Malaysia.

Many schools have been forced to close because of the smog, and some flights have been cancelled.

Scientists are also very worried that the air pollution could lead to problems with people's breathing in the future.

'Third of the world's orangutans at risk'

The fires have also been devastating for the animals who live in the forests.

Wildlife experts fear that as many as a third of the world's orangutans are at risk of dying in the fires.

The flames destroy their habitat and force them into areas where humans live - where they're often not welcome. 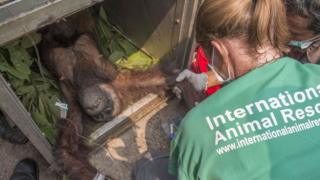 Sadly, many creatures have gone into villages to escape the fires, but they've been attacked by humans who see them as pests.

Animal charities have been working hard to save the orangutans and move them to safety.

Lots of animals are also suffering from the effects of breathing in smoke.

What's being done to help? 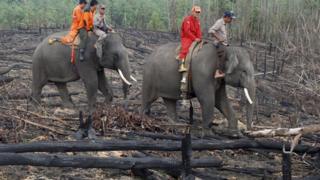 The Indonesian army is trying to put out the fires on the ground, and countries like Japan and Australia have sent help too.

One of the more unusual ways they're trying to put out the fires is by using specially trained elephants.

The elephants carry water pumps and other equipment to make sure the fires stay out.

It's hoped the flames can be brought under control so that the situation can improve soon.

Concern for orangutan safety in Indonesia