Does Pluto have ice volcanoes? 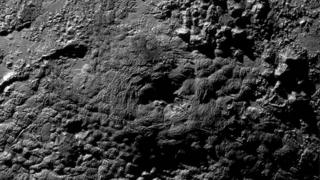 Two possible ice volcanoes have been identified on the surface of Pluto.

They were revealed by images sent to Earth from the New Horizons probe, which flew past the distant dwarf planet in July.

The mountains are several km high and tens of km across and each has what looks like dips in the tops.

NASA/JPL-JHU/SWRI
The colours in this picture show the height of the mountains - blue is low and brown is high.

Unlike Earth's volcanoes that spew molten rock, Pluto's volcanoes - if that is what they are - would most likely erupt an icy slush.

It's thought the substance could be made up of water, nitrogen, ammonia or methane.

Scientists still need to do further work to confirm their volcano idea.

The theory was presented at the annual meeting of the American Astronomical Society's Division for Planetary Sciences, where the mission team is presenting over 50 research reports from the flyby.