First moving pictures of Omura's whales in the wild released

The first moving images of a mysterious whale species, with bodies as long as school buses, has been released by a team of international scientists.

Whale researchers have discovered a population of Omura's whales living near Madagascar in the Indian Ocean.

It's the first time the whales have been seen alive in photos or video.

So little is known about the Omura's that scientists don't know how many exist in the wild.

The study looks at the Omura's techniques for finding food, the sounds they make and their preferred habitat in the shallow coastal waters of Madagascar, an island in the western Indian Ocean. 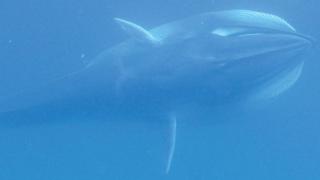 "Over the years, there have been a small handful of possible sightings of Omura's whales, but nothing that was confirmed," says Dr. Cerchio.

Omura's whales are a relatively small whale ranging in length from 10 to 12 metres long. They are from the whale family called rorquals, which all have long, deep grooves along their throats that can expand when they feed.

They are the smaller cousin in this group that includes the giant blue whales and the acrobatic humpbacks.

The species was only given its name, based on dead specimens, in 2003. Since then scientists have failed to find live ones.

But in 2013, Dr. Cerchio and his team spotted the unusually marked whales off the northwest coast of Madagascar. 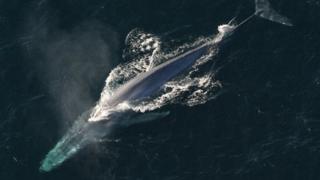 Cerchio said, "At first, we thought they were Bryde's whales...but then with good photographs and underwater video, we noticed they more closely resembled the description of Omura's whales."

The scientists spotted an odd colouring on the head of whales, a rare characteristic found in only one other whale species - fin whales, which are much larger.

"When we clearly saw that the right jaw was white, and the left jaw was black, we knew that we were on to something very special," said Cerchio.

In late 2014, DNA tests confirmed that they had found the first live population of Omura's whales.

Whales play under the Northern Lights