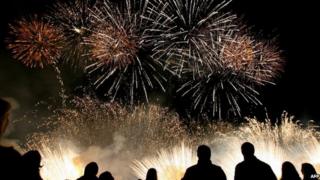 The tradition of Bonfire Night dates back to 1605, when Guy (Guido) Fawkes was part of something called the Gunpowder Plot. This was a plan to blow up King James I and his government on 5 November.

However Guy's plot was rumbled, and he and his supporters were arrested and executed.

These days we remember the event by setting off fireworks and lighting bonfires to burn the 'Guy' - a kind of dummy figure that represents Fawkes.

Here at Newsround we've got some top firework facts to share this Bonfire Night!

Remember, remember, the fifth of November

What is the story behind Bonfire Night? 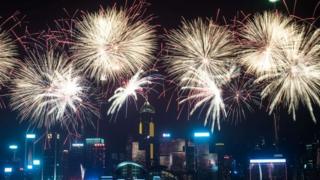 AFP/Getty
Not during the War!

During World War I and World War II, no one was allowed to set off fireworks or light bonfires.

This was part of an act of parliament in 1914 called The Defence of the Realm Act, which aimed to protect people during the war by not showing the enemy where they were.

But, up until 1959, it was illegal NOT to celebrate Bonfire Night in Britain, so during this time people celebrated the event indoors.

What are you doing on Bonfire Night?

Tell us what you're doing to mark the occasion, and send us your Bonfire Night photos.

Here's some tips for taking really good firework photos on your mobile phone.

You must ask your parent, teacher or guardian for permission before you send us a photo.

We may show your pictures on our website or in our TV bulletins. We'll show your first name and which town you're from - but we won't use your details for anything else. 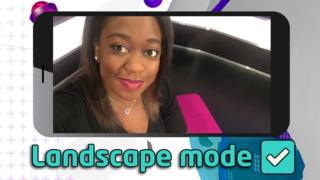 Sparklers are often found at Bonfire Night parties, but they can get incredibly hot!

Some sparklers can reach temperatures of 1000-1600 Celsius - that's around 15 times hotter than the boiling point of water!

Firework rockets can reach speeds of 150 miles per hour (mph) when they are set off.

The reason why you can see a firework explode before you can hear the bang, is because light travels much faster than sound.

When were fireworks first discovered?

Thousands of years ago, a group of Chinese scientists accidently mixed together chemicals to make an early form of gunpowder.

This was stuffed into old bamboo stalks and thrown into a fire to make a loud bang.

These were thought to be the first fireworks.

The Chinese then used this invention to scare away their enemies and evil spirits.

In the 1830s, Italian inventors invented a special casing which let them fire fireworks into the air.

They also came up with ways to mix in different metallic powders to create different coloured explosions.

The very first fireworks display in England took place at Henry VII's wedding to Elizabeth of York in 1486.

The wedding was a pretty big deal because Henry and Elizabeth came from two families - the Lancasters and the Yorks - who had been fighting for many years.

When the two married, it brought peace to the two houses and stopped the fighting.

Another royal who loved fireworks was Queen Elizabeth I, who even created an honorary title - "Fire Master of England" - for the person who created the best fireworks. 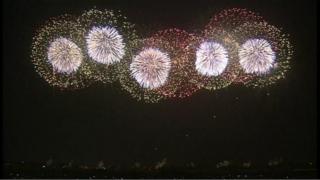 This incredible explosion was created in Konosu in Japan in 2014, and smashed the records for using the world's heaviest firework.

Weighing in at a staggering 460kg - that's about the same weight as a fully grown polar bear! - the firework created a beautiful rosette of light which was 800 metres across.

The title for the most fireworks used in a single display goes to the Norwegians who used a whopping 540,382 fireworks!

The firework display lasted for one and a half hours.

15,272 fireworks weren't counted though because they didn't light.