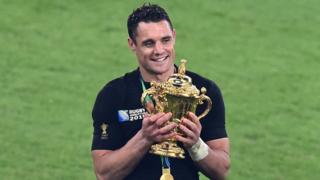 New Zealand star Dan Carter was named World Rugby player of the year for a third time at a ceremony in London on Sunday.

Carter, 33, helped the All Blacks to a 34-17 win over Australia in Saturday's World Cup final at Twickenham.

He has announced his international retirement after scoring a record 1,598 points in 112 appearances.

The All Blacks won the team of the year and Australia's Michael Cheika was named coach of the year.

Carter, who also won in 2005 and 2012, joins team-mate and All Blacks captain Richie McCaw as the only players to win the award three times.