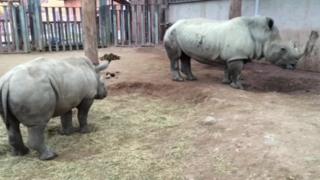 Female southern white rhino, Tswane, has got a new home in Scotland.

She is taking part in a European breeding programme.

Experts are hoping that she will be able to have a baby at Blair Drummond Safari Park near Stirling.

Tswane's species is at risk of extinction in the wild because they are heavily targeted by poachers for their horns, which are used to make jewellery and medicine in some countries.

Rhinos in captivity are matched to produce new babies to protect the future of the species.

Endangered frogs with no tongue bred in UK