Tremors were also felt in the neighbouring countries of India and Tajikistan.

It measured 7.5 in terms of how powerful an earthquake is.

Buildings shook and were badly damaged in Afghanistan. In Pakistan, people fled shops and homes as the shaking started.

More than 150 people are thought to have died because of the quake. 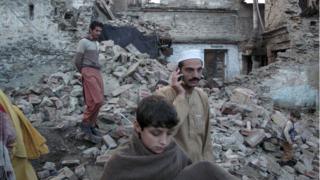 People in the Indian capital Delhi ran into the streets; schools and offices were also evacuated.

The hardest hit area is thought to be in the mountainous area of north-east Afghanistan. The epicentre of the earthquake was more than 200 kilometres underground.

Disney to reveal the secrets of Marvel's biggest TV shows

All UK adults to be offered vaccine by end of July