Lewis Hamilton won an action-packed US Grand Prix to win his third world championship in style.

In a dramatic last 10 laps of safety cars, crashes and overtakes, the Brit forced team mate Nico Rosberg into a mistake that cost him the race.

The German tried to fight back late on, but Hamilton, on fresher tyres comfortably held on for the victory. 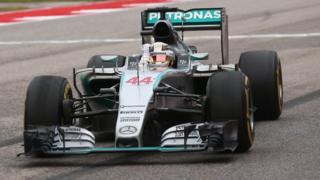 He then performed doughnut spins for the fans in the stadium section towards the end of his in lap before returning to the pits.

From go-kart sensation to three-time world champ, Lewis Hamilton is now the first British driver to win two world championships in a row.

He first got a taste for a career in motor racing at just six years old, when his dad bought him a remote control car.

And Lewis raced that car on Blue Peter. Check it out!

Lewis showed great talent from an early age and it didn't take long before he started racing karts. 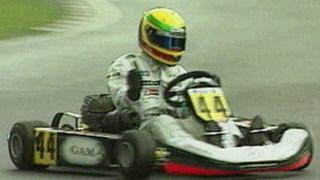 But unlike many other racing drivers, Lewis was not from a wealthy family - and so being able to race consistently wasn't easy, or cheap.

His father worked several jobs and the family made a lot of sacrifices in order to keep Lewis' dream of being a Formula One racing driver alive. 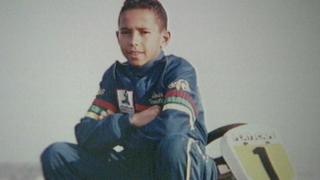 The two drivers have been friends for a long time and have raced against one another for a great many championships in the past. 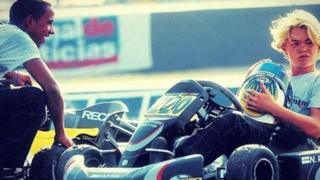 Lewis went on to win many titles in the junior ranks before making his debut in F1 in 2007. He won his first world championship title for McLaren in 2008.

At the time he was the youngest ever world champion and he took the title in thrilling style with an overtaking move on the last corner of the last lap of the last race in Brazil.

After 4 years at McLaren he moved to Mercedes to team-up with Rosberg for the 2013 season in search of another world championship title.

And he did just that. The following season - with 11 race wins in 2014 to Rosberg's five, Hamilton won his second title, becoming the most successful British driver of all time in terms of race wins.

Martin met Lewis not long after that victory in Abu Dhabi to ask him for his advice to wannabe F1 drivers.

Lewis Hamilton has dominated from the first race to the last this season. He passed his boyhood hero Ayrton Senna's career tally of 41 wins and has now equalled Senna's three titles. He is the first British driver to win back-to-back Formula One titles - and there seems to be no stopping him.