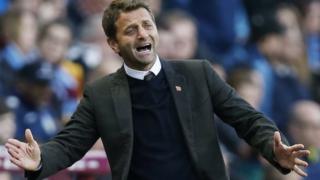 Aston Villa have sacked manager Tim Sherwood after eight months in charge, with the club 19th in the Premier League table.

The move follows a 2-1 defeat by Swansea on Saturday - Villa's sixth straight loss in the league.

The club said in a statement: "The board believes the results on the pitch were simply not good enough".

Under-21 team manager Kevin MacDonald has been placed in charge for the time being.

Hired in February, Sherwood reached the FA Cup final and led the club to a 17th-placed finish in his first season in charge, but has won only one of ten league matches this term.

The club's statement offered Sherwood "sincere thanks for all his efforts during a difficult period last season and for the many positive contributions he has made to the entire football set-up".