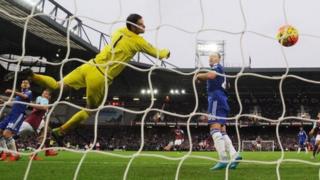 Mauro Zarate fired the Hammers in front when Chelsea failed to clear a corner.

Matic was sent off after being booked twice in nine minutes before the break, and Mourinho joined him after speaking to referee Jon Moss at half-time.

Gary Cahill levelled from a corner but Carroll's first goal since January 2015 sent the Hammers third in the table.

EPA
He did not get on the scoresheet this week, but Dimitri Payet (right) was again behind almost everything West Ham did, setting up Zarate's opener and being heavily involved in the move that led to Carroll's winner

Chelsea, who have now lost five of their first 10 Premier League games this season, continue to sit in the bottom half of the table.

As well as Matic and Mourinho, the Blues' assistant first-team coach Silvino Louro was also dismissed.

Chelsea had five other players booked in a stormy match between the London rivals, the last to be played at Upton Park in the league before West Ham move to the Olympic Stadium next summer.

Leicester 1-0 Crystal Palace: Leicester striker Jamie Vardy scored in his seventh successive Premier League game as the Foxes moved up to fourth in the table.

Arsenal 2-1 Everton: Arsenal went top of the Premier League for the first time since February 2014 as headers from Olivier Giroud and Laurent Koscielny defeated Everton.