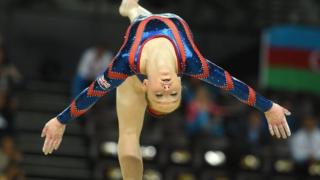 Great Britain booked a place in the women's gymnastics team competition at next summer's Olympics with a superb performance at the World Championships in Glasgow, Scotland.

The team of Amy Tinkler, Ruby Harrold, Ellie Downie, Becky Downie, Claudia Fragapane and Kelly Simm finished third - behind the US and Russia but ahead of China - with eight places at the Rio Olympics in Brazil up for grabs.

"We are incredibly proud," Becky Downie said of their achievement.

"Coming in to this championships all our focus was on producing the best team results we could and to have placed third is very special."

15-year-old Tinkler will go in Thursday's all-around final on her senior World Championships debut along with Harrold, who will also take part in uneven bars.

Ellie Downie will challenge on vault and floor, where she will be joined by Fragapane.

Beth Tweddle explains how to do a handstand

Louis Smith was teased about his arms growing up