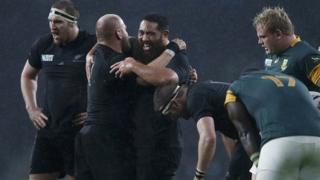 Reigning champions New Zealand are into their fourth World Cup final after beating South Africa in another Twickenham epic.

The All Blacks were far from their best but dug deep to come from behind to win 20-18 a very rainy Twickenham Stadium on Saturday.

"It was always going to be close, they're a great side and they showed that again. I was really proud of our guys," said New Zealand coach Steve Hansen.

They will now face either Australia or Argentina, who meet in Sunday's second semi final.

Scotland and Ireland out of World Cup