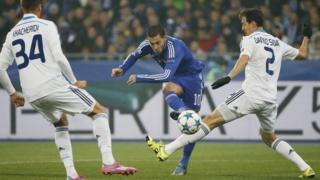 Chelsea twice hit the woodwork and were denied a penalty as they were held to a goalless draw by Dynamo Kiev in Group G of the Champions League.

Chelsea had a strong penalty appeal waved away when Cesc Fabregas went down after a challenge in the box, and Willian's free-kick hit the bar.

Chelsea have now won just one game out of five in all competitions.

Porto's 2-0 win over Maccabi Tel-Aviv means Chelsea remain third in the group with four points from three games, one behind second-placed Kiev and three behind leaders Porto.