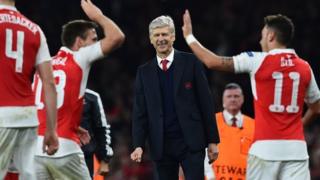 The Gunners' hopes of reaching the knockout phase were in danger after they lost their opening two games away to Dinamo Zagreb and at home to Olympiakos.

Bayern dominated possession but Arsenal dug out the win that keeps their hopes alive when substitute Olivier Giroud scored from close range in the 77th minute after goalkeeper Manuel Neuer made a mistake.

The win was sealed in the last few seconds when Mesut Ozil turned in Hector Bellerin's cross.

Getty Images
Manuel Neuer made four saves in the first half, the best a one-handed stop to deny Theo Walcott

Getty Images
Neuer's save was praised by a number of current and former footballers, with ex-Liverpool keeper Pepe Reina tweeting: "That's why he is the number one in the world."