It's the exact date that Marty McFly and Doc Brown arrive in the future, in the second 'Back to the Future' film, released in 1989.

The movie imagined a 2015 with hoverboards, flying cars, and self-tying shoes. 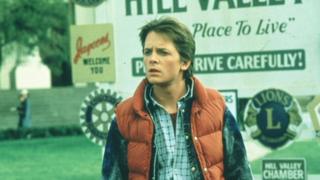 Some of the film's predictions have come true. Just like in the movie, we now enjoy plasma flat screens, live video-calling and technology for unlocking doors with a fingerprint.

Martin went to show some kids the film version of the 'future' to see what they think of it.

Inside the house of the future