In the UK, the Met Office - which keeps track of the weather - names powerful storms.

They do it to make people more aware when severe weather is on the way.

In the past we've had lots of storms with different names including Storm Francis, Storm Dennis, and Storm Ophelia.

What is a red weather warning? 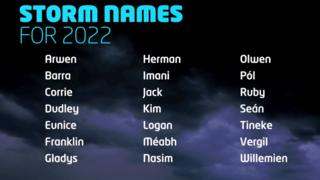 The Met Office decided to start giving storms names back in 2014, in the same way they do in America.

The first windstorm to be named was Abigail on 10 November 2015.

The Met Office hoped that naming big storms will make people more aware of them and how dangerous they can be.

They think it will be easier to follow the progress of a storm on the TV, radio, or on social media, if it has a name.

Derrick Ryall, from the Met Office, said: "We have seen how naming storms elsewhere in the world raises awareness of severe weather before it strikes." 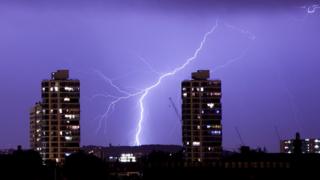 Getty Images
How are the names picked?

Since September 2015, the Met Office has asked people for suggestions for storm names.

The most popular names put forward by the public are made into a list, along with other names suggested by Met Eireann (Ireland's equivalent of the Met Office).

Sometimes the UK will be hit by storms from Europe or other countries, and the storm will keep the name the first country gave it - even if it doesn't follow the UK's alphabetical order - like Storm Jorge from Spain which hit Europe in February.

So if you do have an amazing suggestion you can send it to the Met Office for consideration.

But not every storm to hit the UK gets its name from the list.

Lots of storms start off in the US before crossing Atlantic towards the UK.

To avoid any confusion, they keep the name they were given by the National Weather Service in the US. 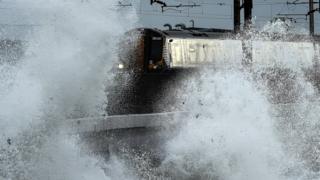 Andy Buchanan
How big do storms have to be to get a name?

Not all storms will be big enough to get names - only those expected to cause significant damage.

A storm will be named when it has the potential to cause an amber 'be prepared' or red 'take action' warning. 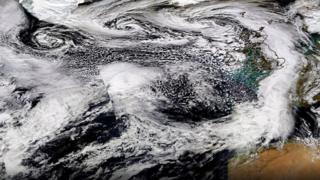 NASA
Who decides if they're named after girls or boys?

The UK storms will take it in turns to be girls' or boys' names.

Strangely, research shows that hurricanes with female names are more likely to hurt more people than those with males names. 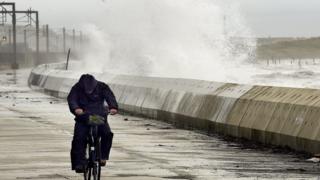 Andy Buchanan
Which storm name will be picked first?

They will be taken from the list in alphabetical order, but there are no storms that start with the letters Q, U, X, Y and Z.

That's because the US National Hurricane Centre leaves out names that begin with these letters.

National Oceanic and Atmospheric Administration spokesman said: "It's just too difficult to find names beginning with X,Y and Z."

The Met Office has done the same thing to make sure official storm naming in the North Atlantic is consistent.

Storm Ophelia moves away from UK