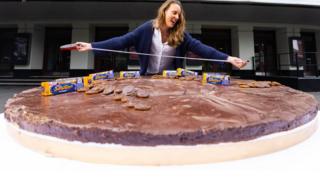 PA Media
Former Great British Bake Off winner Frances Quinn broke her own record, which she previously set in 2017, for the world's largest Jaffa Cake

A former Great British Bake Off winner has baked the world's largest Jaffa Cake, for a second time.

Frances Quinn, who won Bake Off in 2013, used more than 160 eggs, 8 kilograms of dark chocolate and 15 kilograms of jelly for the creation which has diameter of 175cm.

The record-breaking cake took 11 hours to make from start to finish, was the equivalent of more than 6,557 regular-sized Jaffa Cakes and weighed a whopping 80 kilograms!

It's not the first time food lovers from around the world have supersized their snacks. Take a look at some of these other jumbo food creations. 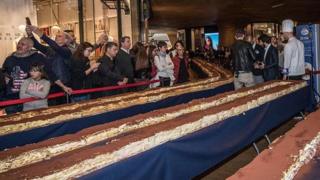 This giant tiramisu which was made in Italy.

All the tiramisu was prepared beforehand in 977 separate containers; it was then put together by a chef and some cooking students.

After the pictures were taken and it was measured the giant desert was split into 15,000 portions and donated to a local Children's Hospital. 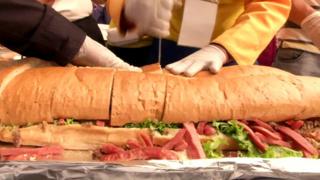 EVN
Mexico has broken its own record for largest torta sandwich

You might be used to having sandwiches in your packed lunch, but we guarantee you have never packed something like this in your school rucksack.

Crowds gathered in Mexico City, Mexico, to watch a group of chefs try to break the country's record for the largest torta - which is Spanish for 'sandwich' - ever made and it was quite a spectacle!

According to organisers, the traditional sarnie measured in at a whopping 70 metres long and weighed 865kg - making it the longest one ever prepared in Latin America.

The sandwich was made up from thousands of pieces of bread, meats, tomatoes, onions and avocado, which had been mixed with more than 60 ingredients, including hundreds of litres of mayonnaise, mustard and spicy sauces. 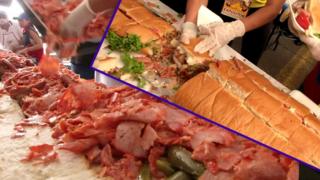 EVN
The sandwich didn't break a Guinness World Record but it is still pretty impressive!

Each section of the super torta had a different flavour crafted by local cooks over the years. 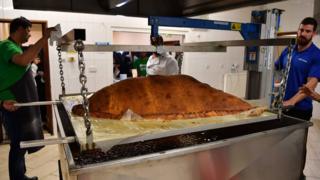 In August 2017, the world record for the largest samosa was smashed in London.

Twelve volunteers cooked the giant samosa, which weighed in at 153.1 kg, at an East London mosque.

The popular Asian snack was then cut up into hundreds of portions and given to local homeless people.

In February 2015, chefs in Guadalajara - in Mexico - broke a world record by making a line of tacos nearly two miles long.

A team of 130 cooks spent six hours creating the masterpiece.

At 8.5m tall, this is the biggest handmade Easter egg in the world.

It was made in April 2015 in Argentina, South America, and 8,000 kg of chocolate - that's about the same weight as two elephants - was used to make it.

Bakers in Rio de Janeiro, Brazil, served up a massive 450-metre-long cake to celebrate the city's 450th anniversary in March 2015.

We don't imagine they'll be taking on a cake like this in the Great British Bake Off anytime soon!

The largest gingerbread house was made in Texas in the US in 2013 and it was not something that would fit in your regular baking tin!

They used a specially designed portable oven to bake the dough and had to be very careful that the massive baguette didn't break.

Nine things you'd never believe are made out of food