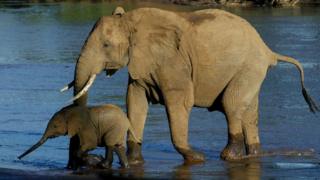 Up to 30,000 African elephants are killed every year by poachers who want to sell their tusks for ivory.

Prince William will go on Chinese TV today to speak out against the use of ivory.

It's a material found in elephant tusks and China buys and sells more of it than anywhere else in the world.

Prince William has spoken passionately about trying to stop the ivory trade in the past and will use his speech to urge the Chinese government to ban it.

Here is Newsround's guide on why the ivory trade is such a big concern and why China seems so obsessed with it. 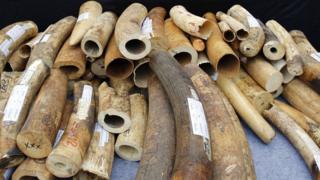 AP
Elephants are hunted for their tusks, and the ivory is illegally sold all around the world.

Ivory is a hard white material that is found in the tusks of elephants and other tusked animals like hippos and walruses. Although rhinos have similar looking horns, these aren't actually made from ivory. However, rhinos are also illegally hunted for their horns because they are used in lots of medicines in China and the Far East.

Lots of elephants die as a result of hunters taking their tusks because removing the ivory almost always kills the animals.

It's estimated that up to 30,000 African elephants die every year because they are hunted for ivory.

Selling ivory was banned worldwide in 1989, but the ban has been lifted several times, so there is still a lot of ivory on sale. As well as this, a lot of ivory is sold by poachers who kill elephants illegally. 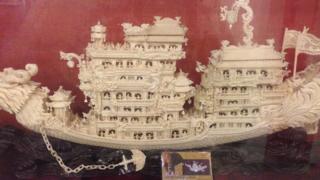 Ivory is often used to make elaborate and expensive ornaments in China.

In China and Hong Kong, ivory is seen as precious material and is used in ornaments and jewellery. It's also sometimes used in traditional Chinese medicine.

Some rich Chinese people think that owning ivory makes them look more successful. Others think that ivory will bring them good luck.

China has the biggest ivory trade in the world and wildlife experts believe that around 70 per cent of the world's ivory ends up there. 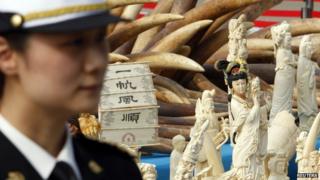 Reuters
The Chinese government has started cracking down on illegal ivory and has destroyed lots of tusks and ornaments.

This year China agreed to ban ivory tusks and ornaments coming into the country for twelve months.

The government has said it wants to completely ban ivory sales soon but it is still legal to sell older carvings and ornaments.

Some people don't want ivory to be banned in China because they say that carving it is an old Chinese tradition that should carry on.

But more and more people in China disagree. A recent survey found that 95 per cent of people there wanted ivory to be banned to protect the elephants.

Elephants have 'best sense of smell'