Rugby World Cup: Which teams are in the semi-finals? 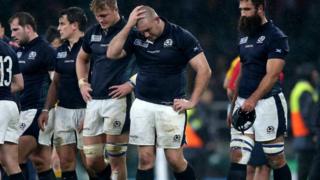 After a weekend of quarter-final matches, Scotland, Wales and Ireland are all out of the Rugby World Cup.

On Sunday Scotland suffered a devastating loss as Australia won the quarter-final 35-34.

And Argentina's early scoring blitz helped them dash Ireland's hopes with the match ending 20-43 to Argentina.

On Saturday Wales were knocked out of Rugby World Cup by South Africa 23-19.

Which teams are through to the semi-finals?

Both semi-finals will take place next weekend.