How do you build a base on the Moon? 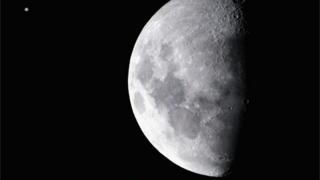 It's an extreme and alien landscape unlike anywhere on Earth.

American astronaut, Eugene Cernan was the last of 12 astronauts to walk across the lunar dust in 1972, no other human has visited the moon since.

But European and Russian space agencies are planning a new mission to find out whether humans could one day return, not simply to visit, but this time to live.

So what will it take to build a Moon base? 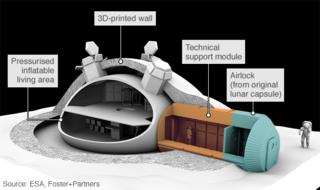 The European Space Agency's vision for a Moon base

One of the biggest challenges of building a lunar base is how to get the materials to the moon.

Sending items there to build with would not only be difficult but also expensive.

The Centre for Strategic & International Studies estimates that it would cost around $35 billion to build a moon station for just four people.

But astrophysicist Tim O'Brian says it might be possible to build a base from the materials already on the moon. 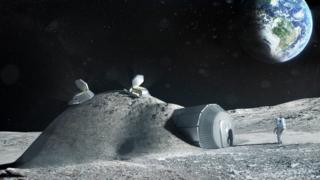 EPA/ESA
Could a giant 3D printer create a base on the Moon?

Another option could be to build a base using a giant 3D printer.

The European Space Agency have included 3D printed items in their plan for a Moon base.

How would people living on the Moon survive?

We also know there's lots of water ice on the Moon, and the rocks have oxygen, that we need to breathe, locked up in them.

The Luna 27 probe will drill deep into the ground to examine whether there is enough water and raw materials to make fuel and oxygen to support a colony of people. 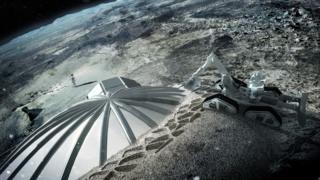 Tim O'Brian says: "This experiment will find water ice, we can split water into hydrogen and oxygen (to) use the hydrogen for fuel and the oxygen for breathing."

There are areas of darkness and extreme cold on the Moon, but there are also areas with high peaks that enjoy almost constant light from the sun.

The ESA say these areas could provide the opportunity for constant solar power.

Professor Johann-Dietrich Woerner, the new head of the European Space Agency, has a plan to build an entire 'village on the Moon'.

He said "We should look to the future beyond the International Space Station."

"We should look for a smaller spacecraft in low-Earth orbit for microgravity research and I propose a Moon village on the far side of the Moon."

Space experts believe that a base on the moon will give humans the opportunity to make exploring space much easier.

Astronomer Phil Plait said: "Building vehicles and other space-based structures on the Moon is vastly easier and less expensive than it would be here on Earth. From there, the rest of the solar system is an easy trip."