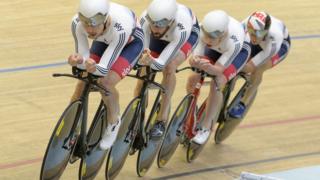 Sir Bradley Wiggins has picked up his first European track title at the track cycling championships in Switzerland.

Wiggins was the part of the four-man Great Britain team who beat Switzerland by more than two seconds to claim the gold medal.

It was a successful day of cycling for team GB as the women's team were also winners.

Laura Trott, Katie Archibald, Elinor Barker and Joanna Rowsell Shand were dominant in the final against the Russians.