The price of Premier League football tops has increased again this year, a BBC survey has found.

Every year the BBC Price of Football survey looks into how much you guys have to spend as a footie fan.

This year the survey found that the average cost of a kids Premier League football shirt is £38, around £1.50 more than last year.

Football clubs set prices in their own club shops and on their websites but high street shops can decide their own prices.

As well as shirts, the BBC survey looked into ticket prices and even how much it costs to buy snacks at the big games.

You told us what you think... 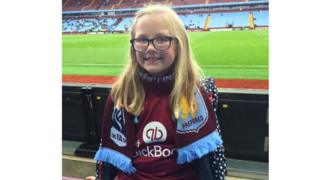 UGC
Harley thinks football kits are worth the price if you love the team.

Going to the football is expensive, but when Aston Villa score it's worth it (although that doesn't happen very often!)

I think that football shirts should be made less expensive and people shouldn't think that just because you don't have a kit, you can't support a team.

I think that football kits are way too expensive and they should lower the price.

I love supporting my favourite football team but I have never been to a football match and can't buy the kits because it's too expensive.

I support Sheffield United. Sometimes the prices for kits and tickets is too high.

Arsenal has the most expensive match day tickets